MACEDONIAN ACADEMY OF SCIENCES AND ARTS

Ð¢he establishment of this supreme Macedonian scientific and artistic institution was preceded by 150Â years of development in the humanities: linguistics, literature, historiography, ethnology and folklore studies. This was followed by progress in technology, the natural and social sciences and the arts, especially poetry, music, fresco-painting and architecture. Numerous Macedonian intellectuals made their contribution to the development of Macedonian culture in the 19th and 20th centuries. Thus there was a continuity in Macedonian cultural history through a series of great cultural achievements which led to the foundation of the Macedonian Academy of Sciences and Arts.

The Ohrid Literary School of Ss. Clement and Nahum at the end of the 9th and the beginning of the 10thÂ centuries prepared the soil for prolific literary, scholarly, educational and artistic activities in Macedonia. This area saw the birth of the first Slavic alphabet which then spread throughout the entire Slavic world. It was the home of the civilisation of the Macedonian Slavs with its high aesthetic values in literature, the visual arts, music and architecture. 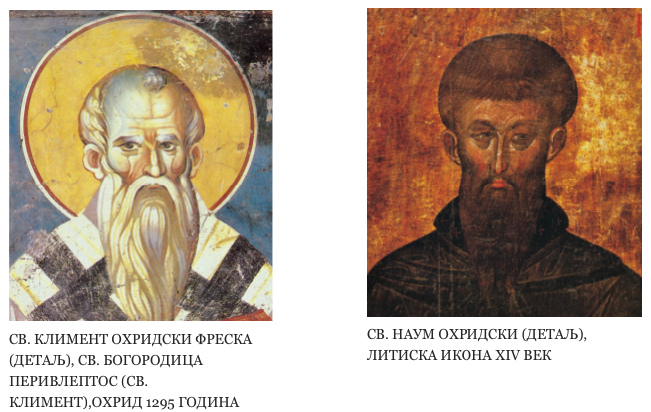 Dimitrija Miladinov (b. Struga, 1810, d. Constantinople, 1862) was an eminent awakener of Slavic consciousness in Macedonia in the mid-19thÂ century, contributing to the introduction of the native language and a Slavic alphabet in schools in Macedonia. He was the first Macedonian collector of folk literature and the chief compiler of the anthology of poetry which his brother Konstantin published in Zagreb (1861).

Konstantin Miladinov (b. Struga, 1830, d. Constantinople, 1862), foremost representative of 19th century Macedonian poetry, was brother to one of the great minds of the Macedonian Revival, Dimitar Miladinov. After his studies in Athens, he studied Slavic Philology at the University in Moscow. Apart from the volumes of his poetry he also left behind the unsurpassed anthology of Macedonian folk poetry (1861) which he collected and edited with his brother.

Rajko Å½inzifov (b. Veles, 1839, d. Moscow, 1877) is the author of the most comprehensive work in the native tongue in the 19th century and a prolific publicist and translator.

Grigor PrliÄevÂ (b. Ohrid, 1830, d. Ohrid, 1893) is the most outstanding and talented representative of Macedonian literature of the 19thÂ century and a leading figure among the Macedonian intellectuals of the period who included Konstantin and Andreja PetkoviÄ, RajÂ­ko Å½inzifov, Jordan HadÅ¾i KonstantinovâDÅ¾inot, Gjorgji Dinkata and others. PrliÄevâs fame followed the publication of his long poems, The Sirdar and Skenderbeg, about life in Macedonia, his AuÂ­tobiography which was a unique piece of prose writing and his translations of The Iliad and The Odyssey. Having written in three languages he became famous in Macedonian, Greek and Bulgarian literature.

Andreja Damjanov (b. PapradiÅ¡te, 1813, d. Veles, 1878) was one of the most eminent Balkan master-builders. His opus includes more than 40 buildings, most of them churches, for example, the church of St. Panteleimon in Veles (1840), the monastery church of St. Joachim of Osogovo, near Kriva Palanka (1845), The Holy Mother of God in the village of Novo Selo near Å tip (1850) and St. Nicholas in Kumanovo (1851) as well as his churches in NiÅ¡, Nova Crkva, Mostar, Sarajevo, etc.

Gjorgjija M. Pulevski (b. GaliÄnik, 1817, d. Sofia, 1895) created a body of work which marks a crucial chapter in Macedonian history. He published the first collection of poems in Macedonian entitled Makedonska pesnarka (A Macedonian Poetry Book, vols. I andÂ II) in 1879 and the first separately published long revolutionary poem, Samovila Makedonska (A Macedonian Fairy) in 1878. He was a Balkan polyglot of rare calibre, a textbook writer and a lexicographer producing his Ð ÐµÑÐ½Ð¸ÐºÑ Ð¾ÑÑ ÑÐµÑÐ¸ÑÐ¸ ÑÐµÐ·Ð¸ÐºÐ° (Dictionary of Four LanÂ­ guages) in 1873 and Ð ÐµÑÐ½Ð¸Ðº Ð¾Ð´ ÑÑÐ¸ ÑÐµÐ·Ð¸ÐºÐ° (Dictionary of Three Languages) in 1875. Pulevski is also the author of the first printed grammar of the Macedonian language, Slognica reÄovska (Grammar) of 1880 as well as the first SlavjanomakeÂ­ donska opÅ¡ta istorija (General History of the Macedonian Slavs) in Macedonian, completed in 1892.

Marko K. Cepenkov (b. Prilep, 1829, d. Sofia, 1920) whose ethnographic, folkloristic and philological records Makedonski narodni umotvorbi (Macedonian Folk Literature, vols. IâX), published together in 1972, in addition to his work in the fields of poetry, prose and drama, make him the most prolific collector of Macedonian folk literature in the second half of the 19th and at the beginning of the 20thÂ centuries.

Kuzman Å apkarev (b. Ohrid, 1834,Â d. Sofia, 1908) was a teacher and was one of the first writers of Macedonian text books in the 19thÂ century and the most prolific collector and publisher of MaceÂ­donian folk literature, an ethnographer and figure of the Macedonian revival.

Atanas Badev (b. Prilep, 1860, d. Sofia, 1908) was a Macedonian composer and teacher of music. He studied music in Moscow and St. Petersburg and was taught by, among others, the great Russian composers Balakirev and Rimsky-Korsakov. Badev was thus one of the first Macedonian composers with a formal musical education. Apart from his choral adaptations of Macedonian folk songs and childrenâs songs, Badev is also the composer of The Liturgy of St. John Chrysostom (first published in Leipzig in 1898), one of the most significant SouthÂ­ Slavic works of this genre from the end of the 19thÂ century.

The numerous scientific, scholarly and literary societies established both in Macedonia and abroad are of particular significance for the history of Macedonian science and art. These include: the Young Macedonian Literary Society (1890â92) and its journal Loza (Vine) (1892) under whose auspices a great number of Macedonian intellectuals were active; the Vardar society in Belgrade (1893â94) which led to the first meeting between the greatest Macedonian intellectuals of the time, Krste Misirkov and Dimitrija Äupovski; and the Macedonian Club with its reading room in Belgrade, which published Balkanski glasnik (The Balkan Herald) in 1902 and laid the foundations of the New Movement.

The most prominent society of this period, however, is the Macedonian SciÂ­entific and Literary Society, established in St. Petersburg on 28th October 1902 and presided over by Dimitrija Äupovski. It expanded, establishing branches among the Macedonian expatriates in Sofia (1903) and Odessa (1905), as well as in Bitola and Thessaloniki (1910â13). As part of its numerous scholarly and literary activities and with a clearly defined Macedonian national agenda, the society proclaimed the Macedonian language as its official language in Article 12 of the Constitution adopted on 16th DecemberÂ 1903. It published the first book in the modern Macedonian literary language (Za makedonckite raboti â On MacedoÂ­nian Matters) in 1903 and in 1905 it published Vardar, the first scholarly, scientific and literary journal in contemporary Macedonian, while in 1913 it produced the first Map of Macedonia. In addition it published historical records and other official documents with a clear Macedonian national ideology and a liberation programme for the preservation of the territorial integrity and freedom of Macedonia (1913â15), as well as the most renowned journal in Macedonian and Russian ÐÐ°ÐºÐµÐ´Ð¾Ð½ÑÐºiÐ¹ Ð³Ð¾Ð»Ð¾ÑÑ (Macedonian Voice) (1913â14). It designed a Macedonian flag (1914) and prepared and published the Programme for a Democratic and Federative Balkan Republic (1917).

For these reasons this scholarly institution with its rich literary and national cultural activity can be considered the foundation upon which the history of the Macedonian Academy was built.

The two leading figures working as part of the Macedonian Scientific and Literary Society in St. Petersburg were Dimitrija Äupovski and Krste Misirkov.

Dimitrija Äupovski (b. PapradiÅ¡te, 1878, d. Leningrad, 1940) was one of the founders of the Society and its President from 1902 to 1917. The author of a large number of articles and official documents, publisher of the printed bulletin of the Macedonian Colony, and or ganiser of several Macedonian associations, he wrote verse both in Russian and Macedonian. He produced the first Macedonian-Russian dictionary, worked on a Macedonian grammar and an encyclopaedic monograph on Macedonia and the Macedonians.

Krste P. Misirkov (b. Postol, 1874, d. Sofia, 1926) was the most prominent Macedonian Slavic scholar, linguist and folklorist, a historian of European calibre and ideologist of the new Macedonian national liberation movement. He is the author of Za makedonckite raboti (On Macedonian Matters) (1903) which is of fundamental importance for the development of the contemporary Macedonian literary language and its orthography, as well as author and publisher of the journal Vardar (1905).

After the end of World War I, activities comparable to those of the aboveÂ mentioned societies were undertaken by the cultural and educational society VarÂ­dar in its offices in Zagreb, Belgrade and Skopje (1935â38), the Nation and CulÂ­ture publicist circle in Sofia headed by Kosta Veselinov (1937â38) and, most importantly, the Macedonian Literary Society (1936â42) headed by Nikola Jonkov Vapcarov.

KoÄo Racin (b. Veles, 1908, d. LopuÅ¡nik, 1943) was a highly distinguished poet, prose writer, critic, historical thinker, active national figure and the most eminent Macedonian intellectual of theÂ period between the two World Wars. His collection of poems Beli mugri (White Dawns) published in Samobor in 1939 is one of the pivotal poetic works in modern Macedonian literature. UNESCO paid tribute to Racin with a volume on his work as part of the Ãminentes perÂ­sonalitÃ©s de la culture slave series (KoÄo Racin UNESCO, Paris, 1986).

The University of Ss. Cyril and Methodius, which was founded in 1946 with the establishment of its first faculty, the Faculty of Philosophy, and the independent scientific and scholarly institutions in Macedonia, the most eminent professors and scientific and scholarly representatives from which formed and still form the main body of the members of the Macedonian Academy of Sciences and Arts, all played an important part in its foundation.

Thus the great works of Macedonian philologists, linguists, ethnographers, historiographers and scholars working in the field of the natural and social sciences and technology, writers, painters, composers and sculptors are all linked to the foundation of the Macedonian Academy of Sciences and Arts.